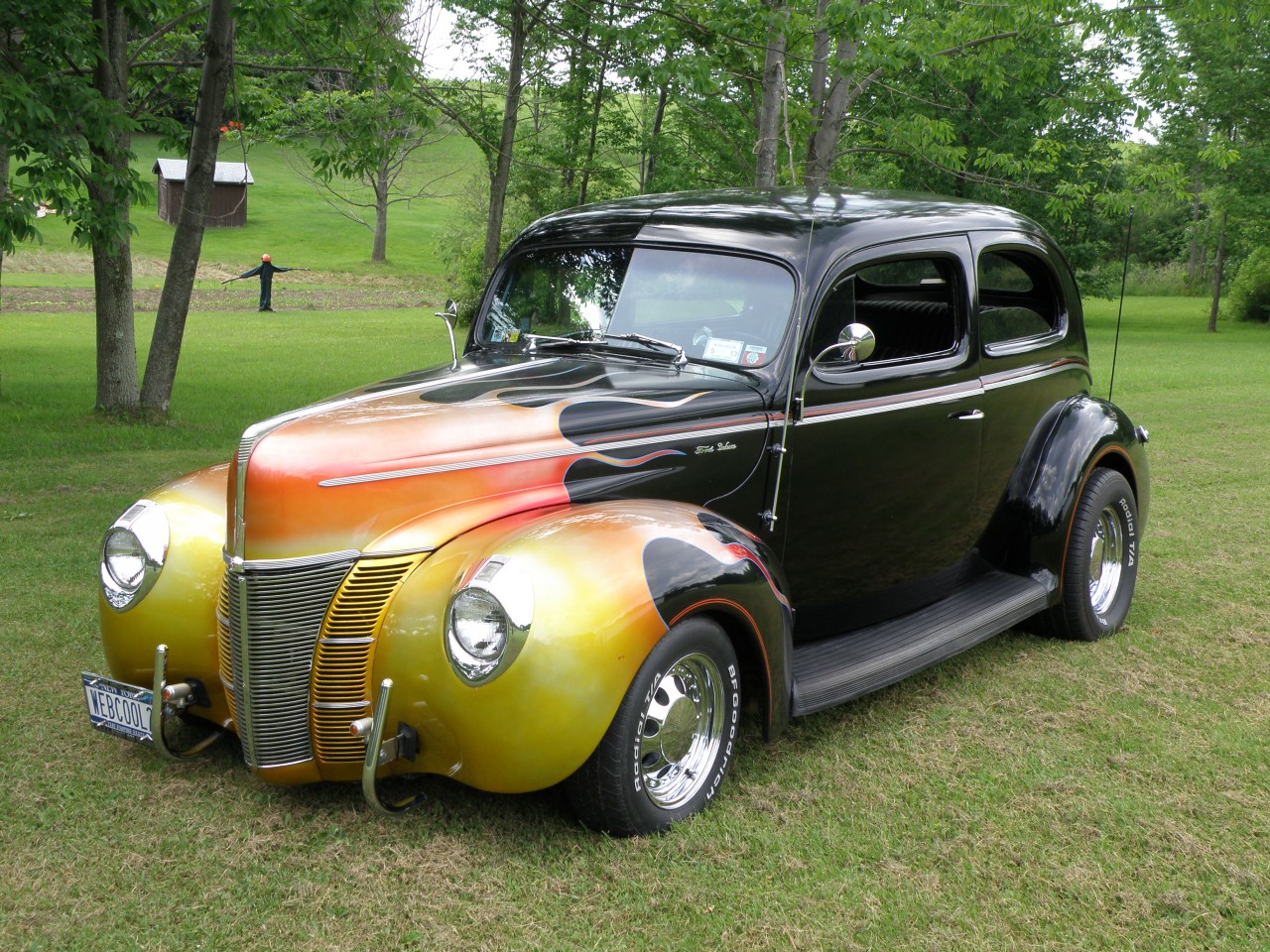 Our 40 Sedan had a very good life in the early to mid 70's - 80's , we did a lot of street racing with her which meant she was always getting new parts put on her . Not from being broken but to go faster . When we got the 40 from our sister-cousin-aunt Jeanie " that's another story " she was all a part , her 1st husband Ed had raced her on the streets of Syracuse for a couple of years and done real well and had taken her a part to make a Drag Car of her . She came to us with a 66-67 Chevy 327 Cu inch engine out of a Elcameno  which meant she had a good steel crank in her belly , we wasted no time in putting together parts for a killer engine . We went through several  sets of heads until we ended up with a good set of 2.02 's , we did the same thing with cams and intakes . One of the best intakes we ended up with was a polished Edelbrock tunnel ram which we put 2 / 600 cfm Holly's on , we ended up with a GM experimental cam for Tran's Am that gave her a lot of RPM's and Pete Jackson Gear Drive in her nose . We ended up buying a Borg Warner Super t-10 from Dave at Crown City Speed Shop and went to work there with the drive train , she got a 50 lb. flywheel and a 3 finger clutch for the shifting . Then came the Hurst Competion Plus shifter and the 4:88 gears in the rear . For headers we used a set of Stahl fender wheel exit  headers that we picked up from the Place-Harris -Outwater 55 Chevy . With this bunch of parts she lead a good life on the streets and was one to be feared .     Her life today is a much easier life , the old 327 had a piston come apart in her and ruined the block but I'd have to say she was probably one of the strongest small blocks in the area for her day . Today she has a 355 Cu. inch block from Racing Head Service in her with the same intake but with 2 / 390 cfm 's on top a Comp Cam with Rhoades Lifters and air conditioning for travel  and a TCI automatic Trans. 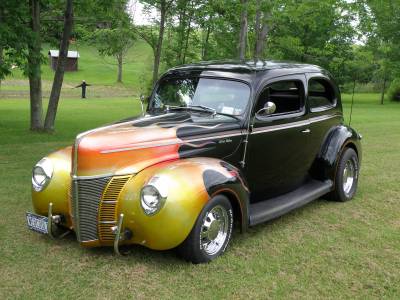 My name is Dave Stoker , I am one of the original founders of 7 Valley Street Rods that started in 1972 . My brother Dick & I have a few cars , 3 / 1940 Fords a Coupe , a Sedan , and a Chopped P/U all are painted Black lacquer with House of Kolor candy flames . We also have a trailer which is the front clip of a 1940 ford ,painted to match the 3 . We have 2/1956 Fords also in the garage a Victoria and a Ranch Wagon , we are in the process of redoing a 1970 Mustang Mach 1 and have a 1948 Divco Milk Truck . I have in the past been treasure of the Club and was president for 5 years back in the late 80's when we reformed the club after a few years of being inactive . We have a good working relationship with all of the area local clubs . I enjoy working with my dog Vickie and spending time with family , also like older genres of music and old movies . Dick & I own 2 1/2 acres of land with a 28 x 60 garage on it where we store our cars and parts. I worked in the auto supply business for 37 years in Cortland ,starting in the speed parts with David Cardner another of our founders . I managed 4 different stores here over the years and owned my own for 4 short years , this was a job I really enjoyed and was a natural for my hobby I meet a lot of great friends in the area from my job .